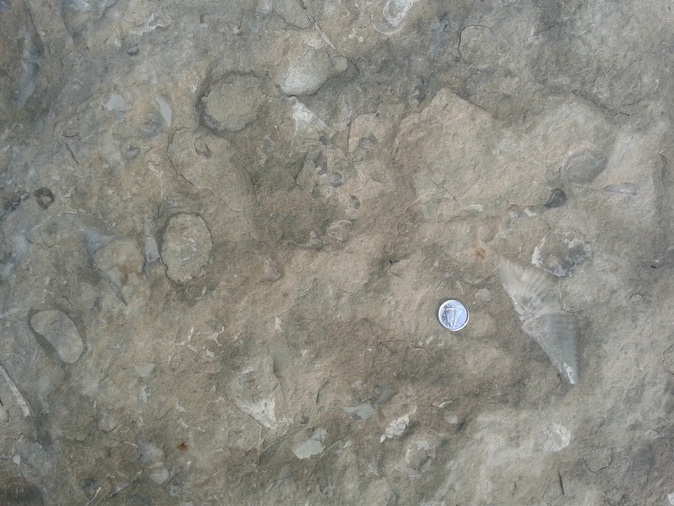 Thanatocoenosis is a Mighty Word

In this tiny episode, just on the heels of yesterday's, I explore a few areas at Western University where fossils have been incorporated as part of the architecture and decor.

After my teaching stint this morning, with camera in hand I took a few pictures of some stone slabs near the Weldon Library. I had been meaning to do so for some while. The slabs are set between the library and another building, girding a tree and is part of the general landscaping that leads to the feature called "concrete beach" (it is tempting here to segue into some of the politically loaded reasoning that goes into architectural planning at universities in terms of crowd control etc., but that is a tangent for another time!).

The image to your left is a top view of one of the slabs. We note here what a busy deathbed this was, this gallimaufry of brachipods and rugose corals. To the right of the dime is a spirifer (a closeup below). And, your word for the day is thanatocoenosis - one of my favourites but just won't fit on a Scrabble board: it means a collection of fossils embedded in the same place that may have originated elsewhere, but deposited there on account of water current. Anyhow, a few more snaps: 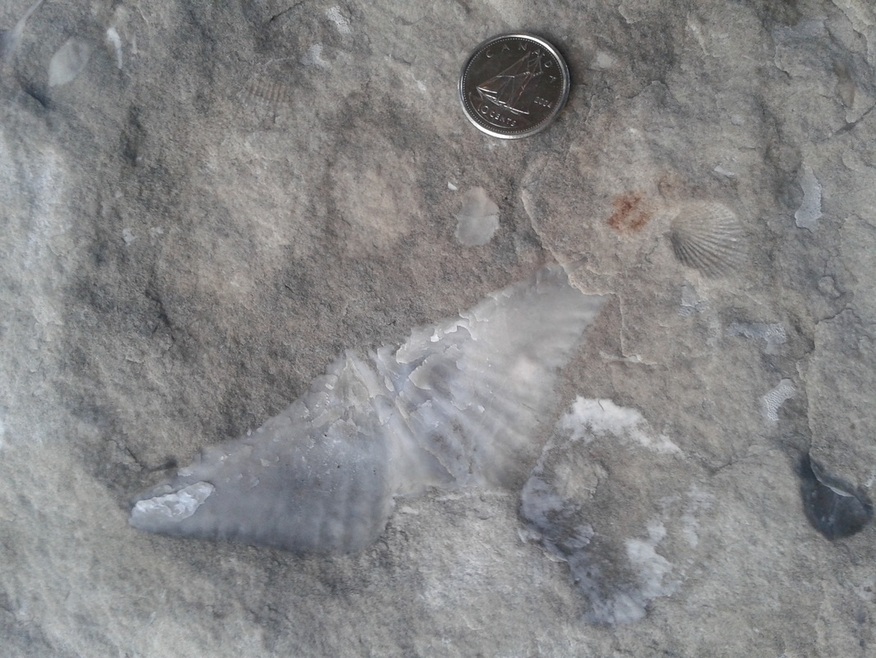 Here's a very nice closeup view of the spirifer featured earlier. Somewhat resembles a butterfly. The cast mineral lends it a kind of glazed look. At the upper right tip, where it is broken, you can see a small scallop.  Since there was little else of interest (and the sight of a big bald fellow staring intently for too long at stone slabs designed for sitting on is bound to result in a visit by campus police!), and mostly other trace fossils only the ichnologist would thrill to, I walked to the other end of campus to the Visual Arts Centre. 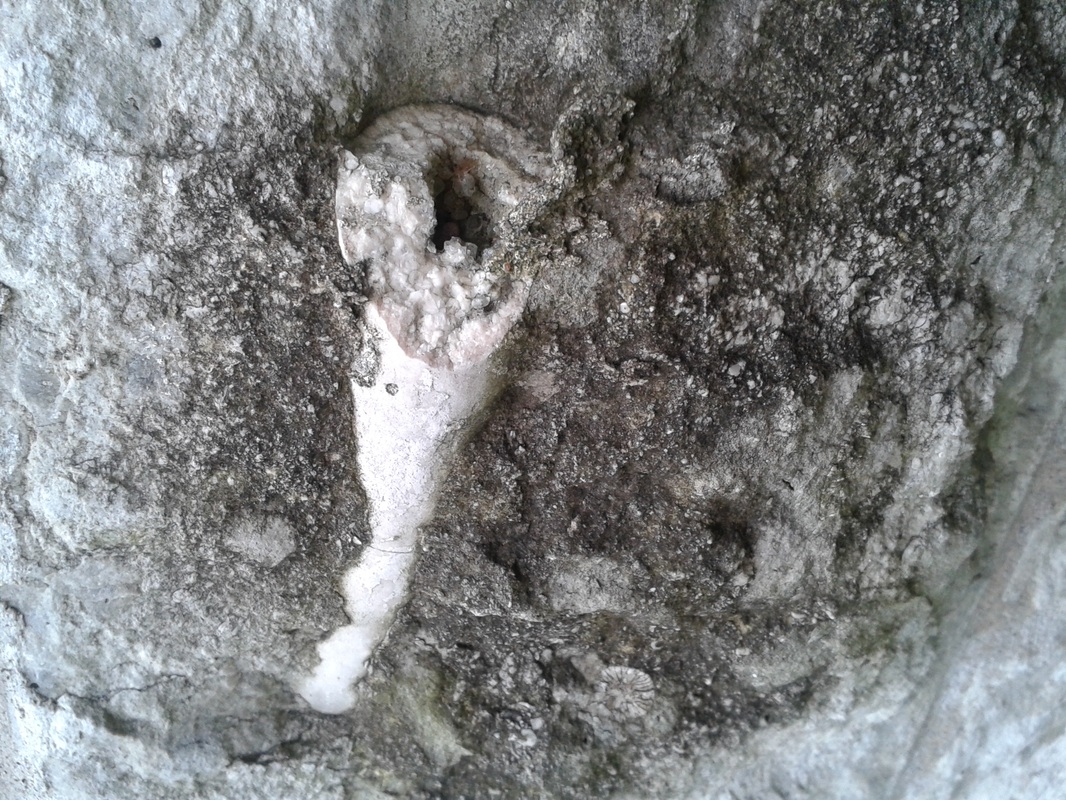 Above is - dare I say it - a bonafide nautiloid, or is it? Common to nautiloid fossils in limestone is some fairly large-grained calcite crystals, usually surrounding the siphuncle. This specimen is lodged right into the exterior wall. Although I do have proof of some nautiloid presence at the VAC, one might argue that this is just another coral. However, despite the presence of outer-shell banding which is sometimes a dead giveaway that it is a nautiloid, it is those big, chunky calcite crystals, and a lack of evidence of septa or mesenteries detail, makes us suspect that this is indeed an orthocone.

But let's talk about the John Labatt Visual Arts Centre, its bold minimalism designed by Raymond Moriyama and erected in 1993 (and, yes, the same architect who designed the Ontario Science Centre and the Bata Shoe Museum in Toronto). On second thought, let's stick to the fossils and leave the architecture alone. The first item to note is that it is highly, highly unlikely that the stone used was quarried in London. How do I know? The fossils tell me. What we do know is that the building material is limestone (and I cannot source it precisely because I cannot find any of the proprietary details of the actual plans). The front face of the building is entirely saw-cut finish, whereas the sides alternate between unfinished (for the roughly hewn look) and narrow bands (~4 inches) of saw-cut finish. Where the stone is visible on the interior, it is honed but not polished. Fossils that appear in these finishes do somewhat resemble the kind of fossils one can buy in specialty rock stores where the stone is tumbled.

380 mya, London was not a big hotspot for nautiloids. The waters may have been too shallow. We also suspect the stone was not quarried here because of the presence of so many gastropods, like this cross-section example closeup here: 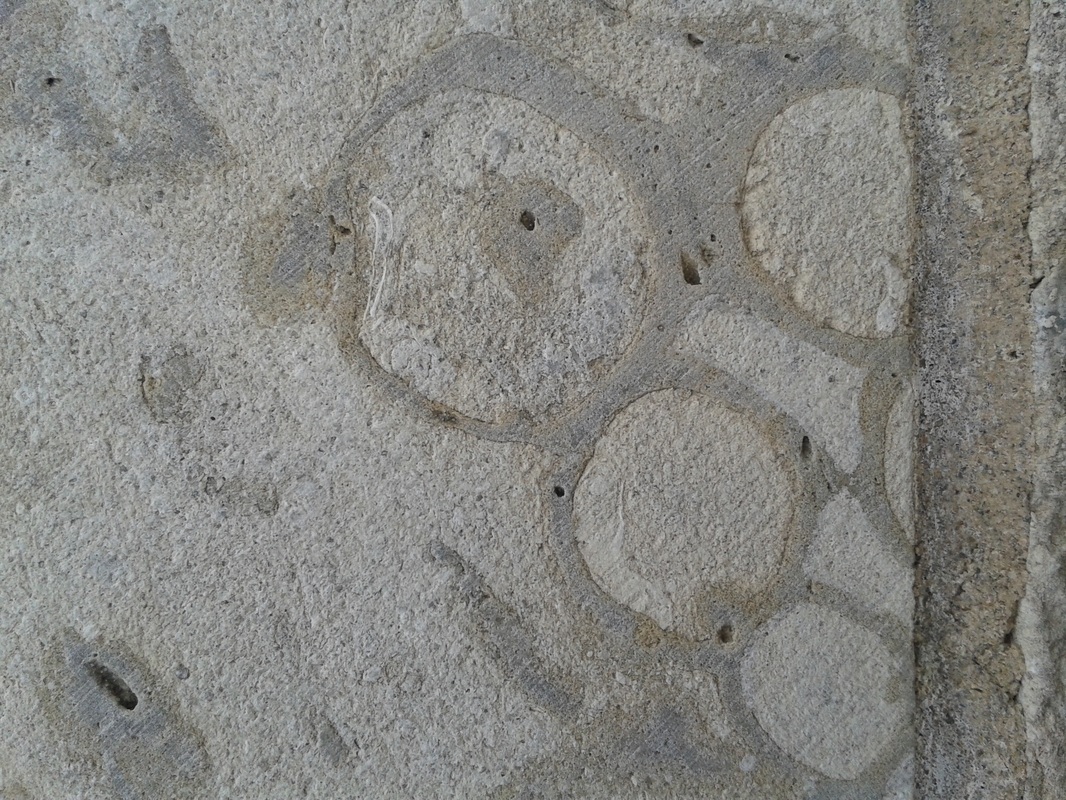 How do I know this is a gastropod? The telltale sign here is the ascending size of the circles in succession. If you were to cut a snail shell lengthwise to reveal it in cross-section, you would see something very similar to this. One has to imagine the whorls in three dimensions. 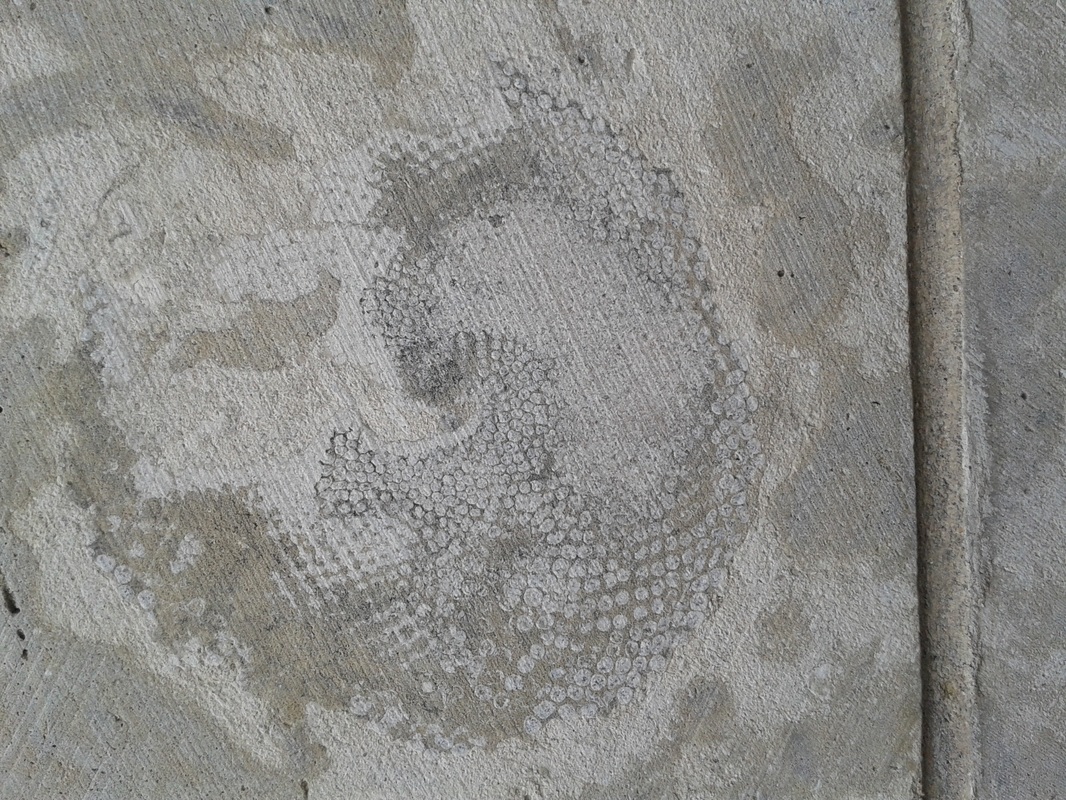 And who is this curled up fellow? Is it an ammonite? No need for too much excitement here: it is another coral, but in an interesting configuration. This is a tabulate coral that usually grows in fairly large mounds. 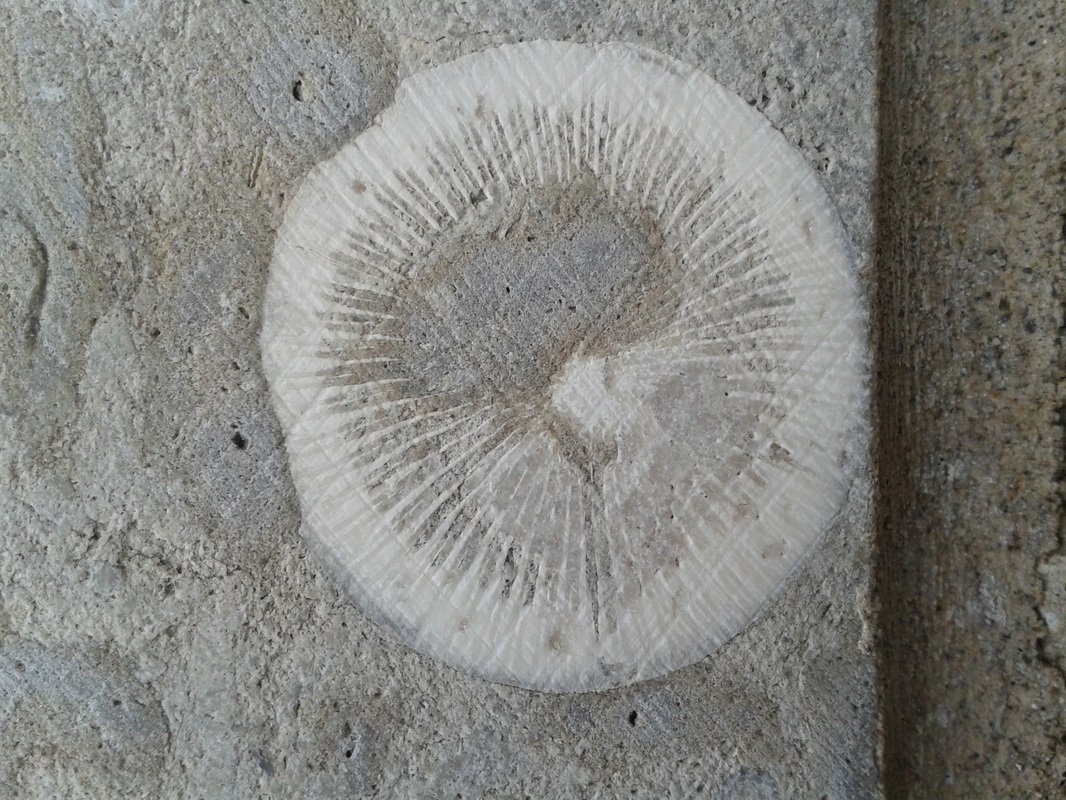 It's ... another coral!And if you guessed rugose coral, you guessed right. This dollar coin sized cross section of the polyp shows detail of the mesenteries, septa and a bit of the calyx, too. One of the benefits of finding a fossil in a saw-cut, honed, or polished stone is that it can really bring out the definition.
Here we see two examples of nautiloids. The specimen on the left has a distinctive curve, and you can see some of the banding of the shell. The specimen on the right is a bit unclear, but it is a cross-section showing some banding, but also where the siphuncle might have been. Below is what the whole nautiloid would have looked like alive: 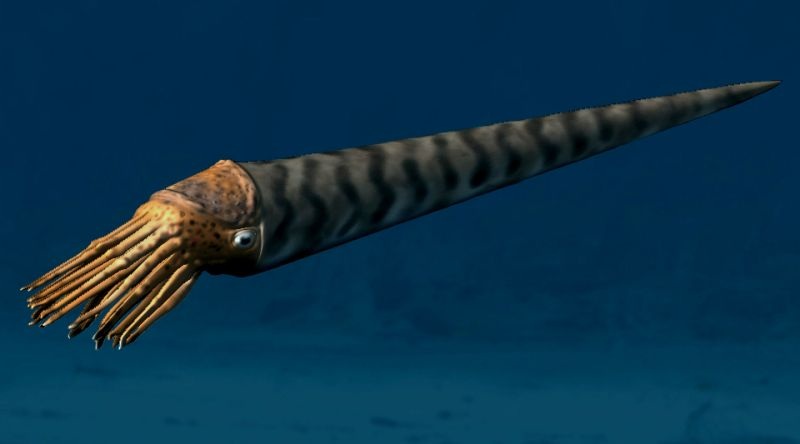 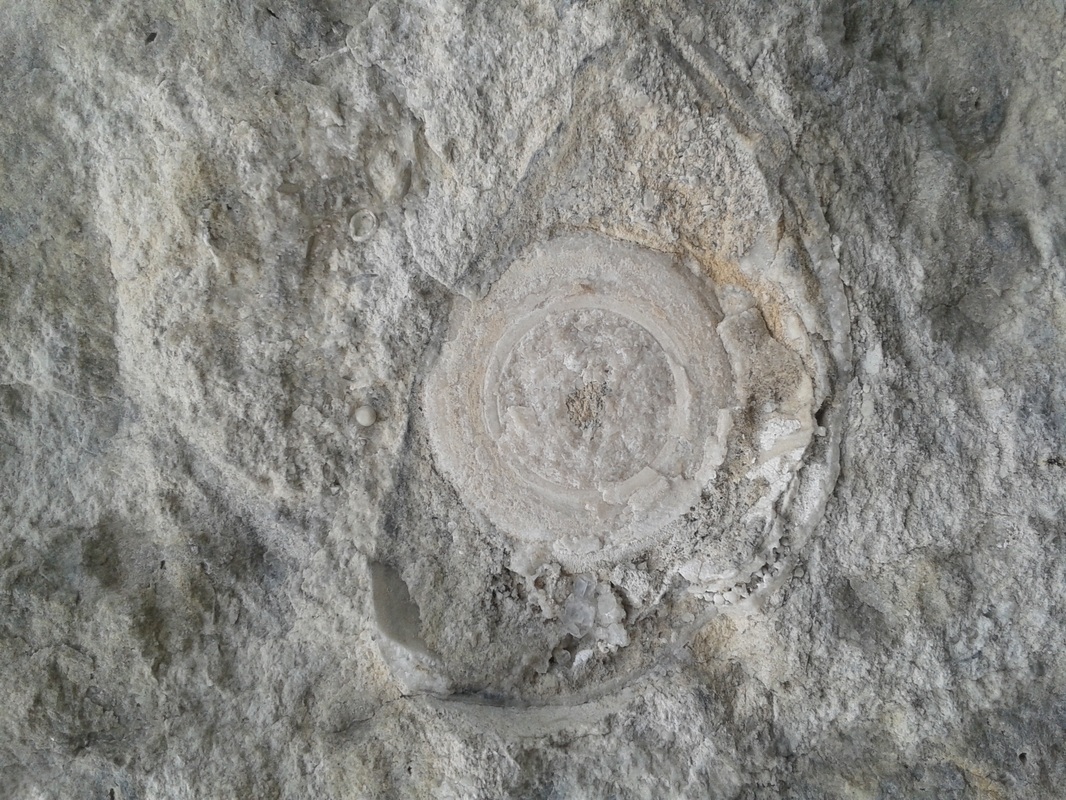 It is tempting to think that this is just another coral, but pay attention to the elliptical outline surrounding the circle. It is more likely that we are looking into the shell of a nautiloid. 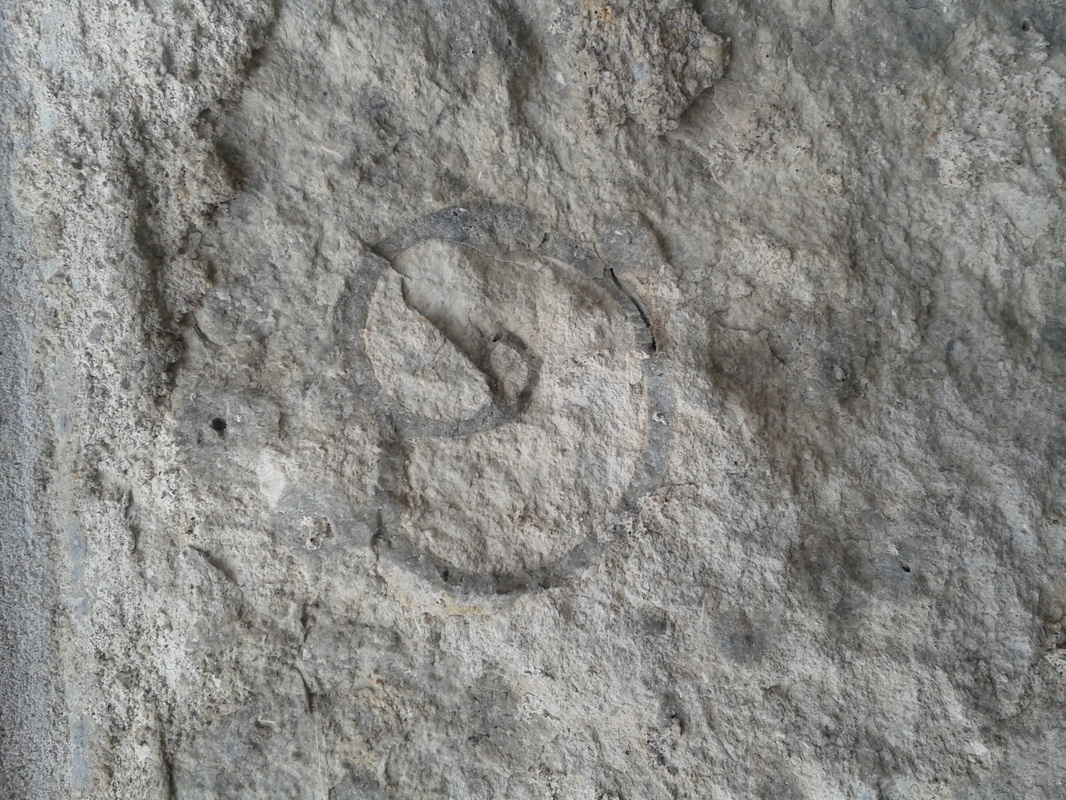 This diminutive fellow is most likely a gastropod (snail). 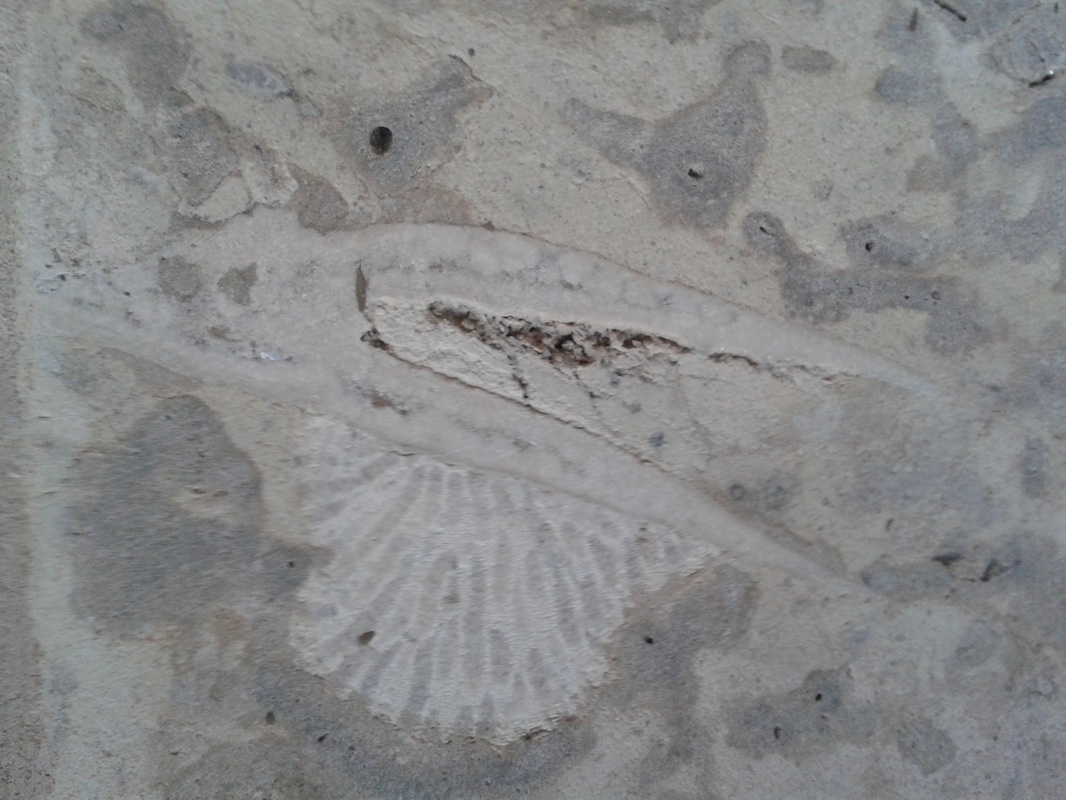 What's this? It looks like bearded callipers or a long crab claw caught on a bit of lace. We can reasonably assume that the lacy feature can be identified as (you guessed it) coral, specifically of the tabulate colonial type. I am, however, at a bit of a loss as to what the pincer-like shape represents. It's always good to come away from a little exploration with some mystery intact!

That concludes this brief foray onto Western campus and its modest host of fossils embedded in its architecture and decor. I do mean to get a few more pictures of nautiloids when I have a bit more time to spend skulking the perimeter of the VAC. Some of you may be wondering why I did not make the trek to the trickling rill we affectionately call the Thames River that runs through the campus. Well, I can say that it is fairly disappointing from a fossil perspective, and I was wearing my fancy shoes...

Next episode? I have no idea when, and as the season draws to a close, blankets of that awful white stuff are soon to follow. I will do my best to see what time I can spare to make just one more expedition for 2013, brief as these have been.  Thanks for "viewing," and I'll be back next season to take you on a tour of Hungry Hollow!
Go to the 2014 Season
Site Content Copyright 2009-2019 Kane X. Faucher